Hit enter to search or ESC to close
Hybrid Storage

Last week during the webinar I received a question from a gentleman who wondered how much IOPS a StorSimple device could produce. Since I never even thaught about testing that, I became curious. As there is no such thing as coincidence, the fact would be that I’m currently in the middle of something called “A StorSimple Implementation.”

So just for your fun and entertainment, I decided to get a hold of a visual IOPS testing tool, in this case CrystalDiskMark, and let it work its magic.

Just for the people who are relatively new to StorSimple; what a StorSimple does, when you create a volume, its spanned accross SSD and SAS disks, ass well as that the volume is expanded into Microsoft Azure. Hot data, data that’s frequently being touched/used is kept on prem on fast storage. The blocks of cold data, data that’s not being used for some time will be moved into Microsoft Azure Storage Accounts.
Since we’re performing a test against the complete volume, we are creating reads and writes in the “hot data” environment, being the SSD Disks part of the Volume.

Currently I’m working on the implementation (and documentation) of a StorSimple model 7020.

So far we’ve created 4 Volumes of 8 TB for this specific use-case, and apart from some testdata (about 8Gigs) the volumes are empty.

We’ve installed CrystalDiskMark, targeted the right volume and conducted the tests. Testing with 4k blocks with a Queue Depth of 32 showed 8500 write IOPS. 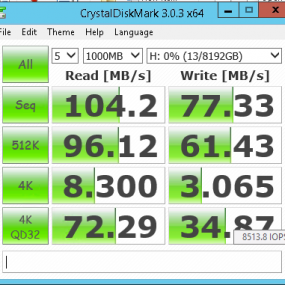 What did this show us? Well nothing much really… It only suggests that there might be SSD drives present, or a lot of SAS disks. What do we need to measure then? The user experience. How long does it take an x number of users to open data, which is stored on a StorSimple device; where the data can be physically located on-prem or in Microsoft Azure.