Last thursday Microsoft announced the General Availability of the largest vm’s in the public cloud space.  The sheer size of the vm’s is mind-blowing, hence the nick-name “Godzilla-VM”. So, like a child on the day before Christmas I couldn’t wait to get my hands (and MSDN credits) on one and I wanted to create one from the new management portal, which can be found through http://portal.azure.com One of the down-sides of this particular general availabillity is that they’re only available in the West-US Azure region.
Other things to keep in mind (for now) are:

Just browsing in the normal way, I started to create a new Virtual Machine on Microsoft Azure, as you can see below…. But no matter how hard I looked, under different subscriptions (Pay-as-you-go, Enterprise Agreement, Trial) no “G-Series” vm’s coud be found….

I even started doubting myself and/or the Windows platform images, so I did try all different subscriptions with an Oracle VM, but also struck out there….

Then I figured, if it isn’t the subscription, and it isn’t the platform… Whatever else cán it be? Indeed… the interface…
With my heart, filled with sadness…. well not really… it still is a “Preview User Interface”, but I thought it was time to add some drama…. Anyway… I turned to the “old and trusted” interface, using the icon on the dashboard of the new interface, where I’ve also could have used the url http://manage.windowsazure.com. And there the magic happened. I signed in with exactly the same credentials as before, but I could actually deploy up to a G5 Virtual Machine on my Azure Subscription?

Now, after reading this whole novell about “G-series” VM’s and User Interfaces you might wonder… “G-series, who cares?” Well, I do, for starters… The G series represent the best performing Virtual Machines currently available on a Public Cloud platform, and at some days it can be tough to device a simular machine in our on-premise datacenter too… Below a quick breakdown of the spec’s. 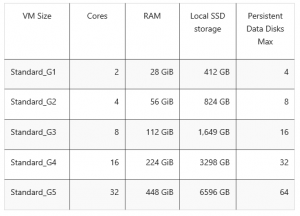 Ofcourse there would have been one tool that would have prevented this blog from being written and posted… One awesome management instruction where I could have checked whether a G-series VM was mine for the taking…. If only I knew of such a way… Something like Powershell!

Ow wait, we do have Powershell capabilities on Azure, why didn’t I realize this any sooner? So when I opened my “Powershell for Azure” console and did a quick “Get-AzureRoleSize | select InstanceSize” it quickly returned the following output: 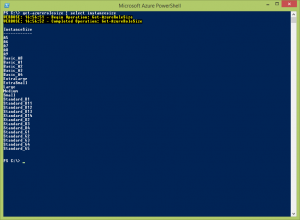 Once again, Powershell could have returned the answer for my quest, faster then any User Interface, old or new… Have fun discovering the power of these new types of Virtual Machines in Azure!